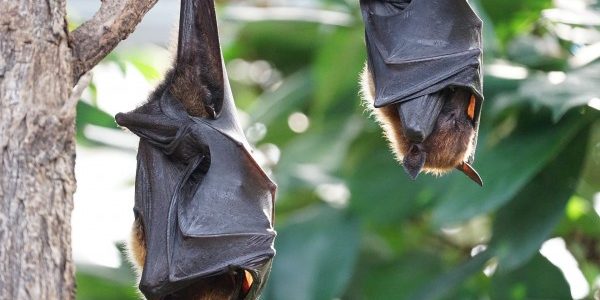 Did you know that the bat is the only mammal capable of continuous flight? Bats are super cool animals, and there are tons of different bats. The bat pictured (photo by Joel Sartore, National Geographic Photo Ark) is an “Indian flying fox.” This bat has a wingspan of approximately 12 inches. In comparison with the smallest species of bat, that is pretty large. According to The Nature Conservancy, the smallest bat is about the size of a thumbnail.

But when you compare this bat to other species of flying foxes, it is actually quite small. Other members of the flying fox family can have wingspans of up to six feet! These animals are nocturnal and find their way in the dark using echolocation. Echolocation is the use of soundwaves to determine where objects are located in space and is very similar to sonar systems. Bats do this by emitting high-pitched sounds that are inaudible to humans. These sounds can also help mothers find their pups. Bats create their own unique signals that help them know which pup is their own, even when they are among thousands of othere pups.

Although bats are very cool animals, they can also be very dangerous. According to the American Association for the Advancement of Science, bats are more likely to harbor viruses dangerous to humans compared to other mammals. These viruses are called “zoonoses,” which are diseases that originate in animals. Bats host a significantly higher number of zoonoses than other animals. Some of these diseases have the potential to cause epidemics in humans, and scientists have a tough time knowing where to focus efforts of identifying unknown and potentially dangerous viruses. Take a look at this article to learn more about the many zoonoses bats can carry.

If you are having issues with these animals in your home, please call us. We offer bat removal services because we want to keep you and your family happy and healthy. We can remove the bats safely without putting you at risk.