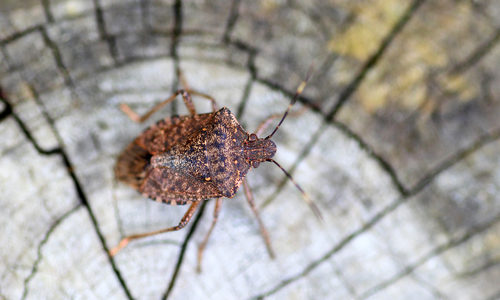 What is a stink bug?

The most common variety of stink bug is the brown marmorated stink bug. They are an invasive species that found their way to the United States from Asia in the mid-1990s.

What does a stink bug look like? They’re shield-shaped insects that come in shades of mottled dark brown and tan. They have banded wings and straight antennae and their average size ranges between 12 and 17 mm in length (about ½ inch).

A single female will lay between 20 and 30 eggs that she’ll secure hidden on a host plant each summer. The eggs hatch in less than a week, usually around four days. Within a few months, all these new babies will be adults that start their own reproductive cycle the following summer.

Stink bugs don’t normally bite, and, in fact, their mouths are not designed to pierce human skin. Some people may get a stink bug rash after an allergic reaction to the compounds they release.

On the rare occasion you are bitten by a stink bug bite or notice a stink bug bite mark, keep the bite area clean and relieve itching with a cold compress. If the bite becomes infected or you experience unusual symptoms, consult your doctor.

Though they may not pose much of a physical threat, stink bugs are capable of being a considerable nuisance. Stink bugs like to chew up any greenery they can find including your house plants and gardens. Another distinct feature of stink bugs is the namesake odor they emit when crushed (which is why when it comes to removing them, it’s always better to call a professional).

Why do I have stink bugs in my house?

You might have something around your home that attracts them or maybe you were just unlucky. Due to their distinctive flat body-shape, these bugs are adept at getting in through cracks and narrow openings that most other bugs can’t. They don’t like cold weather, so they’re especially inclined to burrow inside through imperceptible cracks, holes, or tears around all home entrances.

Stink bugs are attracted to light and warmth, so don’t be surprised to find them on or around your porch while they plan their way inside. Once inside they often congregate in south facing window sills.

As with most pests, preventing stink bugs means you as a homeowner secure your home. Make sure all cracks around doors and windows are sealed with caulk, repair any torn or damaged window screens, make sure all your weather stripping is up to date, and stay aware of how easy their small bodies can fit through even the most minuscule opening. Fall is prime time to identify entry points or a stink bug nest.

An expert exterminator from Gregory Pest Solutions will be your full-service pest solutions provider specializing in effective stink bug control and prevention for your home or business. We’ve been your local stink bug exterminator in homes and businesses since 1972. We stop stink bug infestations anywhere they appear.

Whether your problem is seeing a few or an entire nest of stink bugs, our experts will identify where stink bugs are entering and develop a plan of action. We’ll eliminate any bugs that are currently in your property and prevent them from becoming re-established in the future. Using expert knowledge, targeted baits, and similar efforts, we can guarantee you peace-of-mind knowing that stink bugs will not continue to be a problem for you.

What do stink bugs eat?

Stink bugs are omnivores that are known for attacking crops of fruits, soy beans, corn and even nut trees. They also eat other insects and larvae. As winter approaches, their systems slow down and they stop eating. The food in your home is probably safe during this time as stink bugs just want a quiet place to rest until spring.

Two main things attract stink bugs in the fall when they’re looking for a place to lie dormant over winter: warmth and light. If you have fruit bearing trees or plants that already attract stink bugs, they’re more likely to be in the area. Stink bugs will perform reconnaissance around your home to find cracks and openings to get inside where it’s warm. Once inside, stink bugs release scent pheromones that others can follow.

How do stink bugs get in the house?

Stink bugs’ thin and smooth bodies allow them to slip through tiny foundation cracks or window pane gaps. Once inside, they leave trails for others to follow.

Yes. Adult stink bugs have two sets of wings and can easily access windows and openings well above ground level.

While not poisonous to humans, stink bugs do excrete a smelly, toxic liquid that gives them their name. This is primarily a defensive mechanism.

If you’ve got stink bugs in your home or business, you’ve probably seen streaks of excrement along your windows or walls. Clean these marks with soap and water to prevent others from following their trail.

How to get rid of stink bugs once they’re in my house?

Your vacuum cleaner is your best defense against a stink bug infestation. Suck up bugs as you discover them and empty your canister or bag outside. Vacuuming avoids crushing stink bugs which can release their unpleasant odor. For comprehensive stink bug removal and prevention, call Gregory. We’ll identify where they get in, remove existing bugs and prevent future invasion.

Where can I get stink bugs removal?

Get the best pest control technicians in the business to take care of your stink bug problem. If you live in any of the states below, you’re in our service area. That means that you’re only a phone call away from our comprehensive commercial and residential pest control services.

Whether you’re looking for stink bug control in South Carolina, or one of the many other states we serve, Gregory Pest Solutions has got you covered. Get in touch today using the links below.

Ready to get Started? Our technicians are ready to help rid your space of unwanted pests. Schedule Service CALL 800-922-2596 Request a Quote