Wasp vs Bee: How to Tell The Difference

Home Stinging Insects Wasp vs Bee: How to Tell The Difference 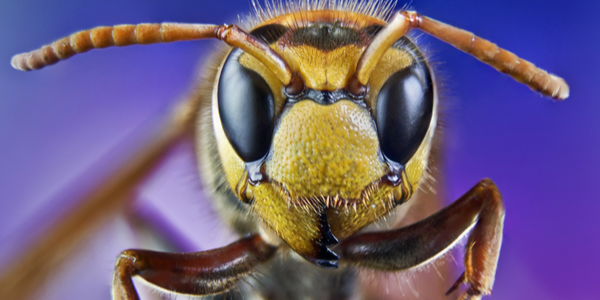 Wasps and bees are both members of the insect order Hymenoptera but they took very different evolutionary paths about a million years ago. While they are dangerous stinging insects that can be a summer nuisance, bees and wasps are also extremely beneficial members of their ecosystems.

How do you tell the difference between bees and wasps? We’ll cover bee vs wasp appearance, nests, stings and behavior. We’ll also throw in some tips for how to keep stinging insects away from your home or business. Gregory Pest Solutions is always ready to help when you have a bee or wasp problem.

From a distance, bees and wasps appear very similar. They have similar coloration and striped markings. Up close you can observe the striking differences that set them apart.

Bees are rounder with fuller bodies, thicker legs and most notably fuzzy hairs. These hairs help them collect pollen.

Wasps are slimmer, have narrow waists and thin legs. Their bodies are smooth and shiny without hairs on them.

Hornets are members of the wasp family but are typically larger in size.

Bees and wasps share a near identical life cycle. They both lay eggs that hatch into larvae that become pupae and eventually molt into adults. Depending on the season, this process could take days, weeks or months.

The biggest wasp and bee difference is their food preferences. Bees are herbivores that subsist on pollen and nectar. When a female lays eggs in the comb, a nectar “loaf” is placed next to the cell for the hatchling to eat.

Wasps on the other hand are predators. They hunt and eat other insects and larvae. Instead of providing their hatchlings with nectar, a wasp will leave a paralyzed insect such as a grasshopper next to it. The grasshopper remains alive to maintain freshness but is unable to move.

A common misconception is that all bees and wasps live in colonies. Bumblebees and honeybees are the only variety of bee that is social. Paper wasps, yellow jackets and hornets are the social varieties of wasp. Thousands of other bee and wasp species live solitary lives – many in underground nests where they raise their young.

Another major difference between bees and wasps is the way they construct their nests.

Bees construct their hives around tree branches, in hollows and in crevices using wax. Worker bees synthesize the wax from honey that their bodies digest and process. The wax exits via pores on their abdomen and then is chewed to soften it and mold it to the hexagonal cells that make up the hive.

Most wasps suspend their nests from tree branches, eaves and overhangs. Yellow jacket wasps build their nests underground. Wasp’s paper-like nests are made using a mix of regurgitated wood pulp and saliva. A wasp colony will expand the size of its nest as the queen’s egg production increases.

Another difference between a bee hive vs wasp nest is that bees will use their hive repeatedly over several seasons. Wasps use theirs for a single season and die out in the fall.

After the queen dies, wasps fend for themselves and seek out sweet sugary foods. This is why wasps can seem more aggressive in the fall.

A final difference between wasps and bees is their stings. Honeybees have barbed stingers that become lodged in their target. As a result, they can only sting once. They also only attack in self defense. Wasps and bumblebees may be more aggressive and can sting multiple times. In all varieties of bees and wasps, it is only the female that can sting.

The way humans experience a bee vs a wasp sting doesn’t differ much. Both insects insert a stinger that is attached to a venom sac. Once the stinger is under your skin, the venom sac contracts and squeezes a painful toxin into your body. Your body reacts by creating a swollen welt at the bite site to combat the infection. If you experience severe symptoms, seek medical help immediately.

A Note About Protecting Pollinators During Pest Control

At Gregory Pest Solutions, we recognize the important role pollinators play in our agricultural system. We are committed to protecting our pollinators and also the life and health of our customers through smart and responsible pest control. These two commitments are not mutually exclusive and we adhere to the following protocols:

Yes. Even though they don’t gather pollen like bees do, wasps are still an important pollinator. They can still transfer pollen as they fly from plant to plant. Because they lack the fuzzy, pollen-attracting hairs that bees have, they’re less efficient at it.

Most wasps are not capable of making honey but a few varieties like the Mexican honey wasp can. These wasps only make a small amount that they consume themselves.

How Long Do Wasps and Bees Live?

Most wasps don’t live longer than a couple of weeks. The wasp queen can last a year but will lay eggs to produce new queens after she is gone. Bees live longer –  usually a couple of months and up to 200 days. Queen bees can hibernate and return over several years to repopulate their hives.

It can but it may take longer for them to die. In the meantime, bees under siege release a pheromone that tells the hive to attack. Be careful! It’s also important to note that bees are protected in many states and killing them could incur fines.

What Is The Difference Between Wasps and Hornets?

All hornets are wasps but not all wasps are hornets. Hornets are a larger variety of wasps that are somewhat wider around their heads and abdomens.

How Do You Get Rid of Wasps and Bees?

The safest way is to call your local pest control professional. An experienced technician with the proper protective equipment can remove nests safely.

How Do You Keep Bees and Wasps Away?

There are many things you can try that bees and wasps don’t like. Dryer sheets, mothballs, clove, peppermint oil and lemongrass have all been shown to deter stinging insects. Wasp and bee repellent plants you can plant in your yard include geraniums, cucumber, basil, marigolds, eucalyptus and citronella and mint.

Don’t take chances with stinging insects. When you spot a nest over your garage or when a swarm disrupts your backyard BBQ, call in the pros. Schedule your bee or wasp removal today for peace of mind all season.