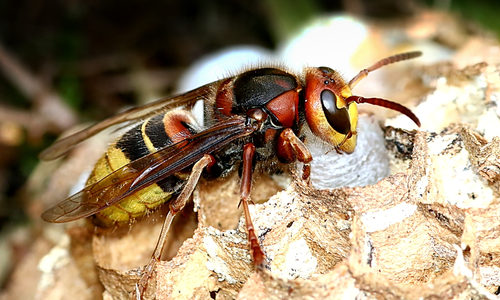 What is a hornet?

Hornets are stinging insects that are members of the wasp family. They are distinguished by their larger size and aerial nests vs the nests in the ground that most wasps make. They may also have a red or orange coloring rather than the traditional yellow and black. While hornets aren’t generally as aggressive as other wasps, hornet nest removal is best handled by a pest control professional.

Types of hornets in the U.S.

There are approximately twenty different species of true, known hornets worldwide, but only one of them lives in the United States: vespa crabo, otherwise known as the European hornet. As its common name suggests, the European hornet is an introduced species to the U.S. from Europe. Other species of wasps that are mistakenly called hornets include the bald-faced hornet, the mud dauber,  the ground hornet and the yellowjacket.

When a hornet feels threatened, it releases an attack pheromone that will draw other hornets nearby to mobilize a defensive attack. This can also happen if a hornet is cleaned near its nest. Just like wasps, they have smooth stingers which make them capable of making multiple painful stings without any harm coming to themselves. Also like wasps, they aren’t inherently aggressive unless they feel that their nest is threatened, but due to both the attack pheromone and their especially defensive nature, it means that you need to take their potential threat seriously, especially if you’re allergic and susceptible to anaphylaxis.

Why do I have hornets?

Hornets are most active in the evening. If you notice a single hornet buzzing around any part of your home, it’s likely that you have a characteristic paper mache looking nest nearby. The main thing that draws their kind to your home or business is access to readily available sweets like berries, fallen fruits, or the residue that can build up inside of improperly cleaned recycling or garbage bins.

How can I prevent hornets?

Remove the things they might be attracted to, such as poorly sealed garbage cans or overburdened fruit trees. You can also make sure to keep any potential entry points closed off by paying special attention to your home’s exterior and foundation. Hornets are attracted to white lights at night. Consider changing your outdoor bulbs to yellow.

How can Gregory Pest remove hornets from my home or business?

Don’t attempt to deal with a wasp nest on your own. An expert exterminator from Gregory Pest Solutions will be your full-service pest solutions provider specializing in the effective removal and extermination of hornets and their nests.

One of our pros will formulate an environmentally friendly plan for removal and prevention of hornets from your property. Once we implement our plan, our experts will remove accessible nests so your family or customers can enjoy your outdoor spaces without the fear of painful stings. Trust our hornet removal professionals to do the job right. 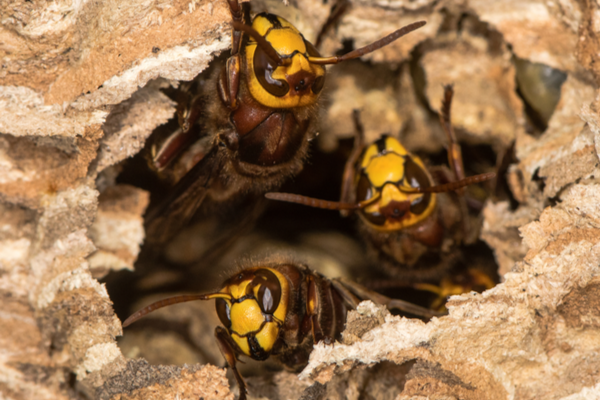 How do you tell the difference between a yellow jacket vs hornet?

Yellow jackets are smaller insects and will always have distinctive yellow and black coloring. Hornets are larger and tend to have reddish or brown coloring.

How do you tell the difference between a wasp nest vs hornet nest?

Both insects make hanging paper nests. Wasp nests are gray colored and cone shaped. They have a single outer layer that is more flimsy. Hornet nests are pear shaped and can be gray to brown in color. They have a thicker outer layer and are often built in higher areas like tree tops and utility poles.

What is a murder hornet?

Murder hornets are a variety of invasive Asian hornet that have recently been identified in America’s Pacific Northwest. These hornets can grow up to two inches long and are notorious for killing and beheading populations of bees. Their stingers are longer and can cause a deep, painful sting in humans. In Japan they kill an average of 50 people per year.

How to tell the difference between a bald faced hornet vs European hornet?

Bald faced hornets are not actually hornets at all but a type of wasp that is similar to a yellow jacket. They can be easily distinguished by the white markings on their face and sometimes bodies. Hornets typically have red or brown markings instead of yellow or white.

Is the European hornet dangerous?

Yes. While a single sting is moderately painful for a few minutes, hornets can sting multiple times and, when threatened, will attack in masses.

How do you get rid of European hornets?

There are a variety of hornet baits, traps and sprays available commercially. While many of these are effective, you put yourself in the line of fire when addressing your hornet problem on your own. You also risk the chance of returning pests. As with all stinging insects, hiring an experienced pest control expert is your best bet.

Where can I get professional hornet control?

If you’re looking for residential and commercial hornet control services or help with other stinging insects throughout the southeastern U.S., look no further. Gregory Pest Solutions offers safe and effective removal of insects and nests. If you live in one of the states below, you’re a simple call away from the hornet prevention and removal help you’re seeking. Let our experts handle your hornet problem.

Our technicians travel wherever they’re needed in ready-to-go, completely stocked trucks. Get in touch the next time you’re in need of hornet removal and we’ll be there ASAP.

Ready to get Started? Our technicians are ready to rid your property of unwanted hornets. Schedule Service CALL 800-922-2596 Request a Quote